Beveridge on song at Mot

“An absolute buzz” is the way former Buller prop Phil Beveridge describes his first ever win as a horse trainer. 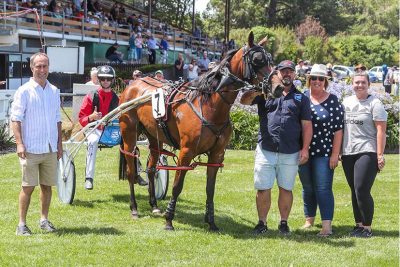 Phil Beveridge and team with Hello Adele after her win

On Sunday at Motukarara his five-year-old mare Hello Adele was expertly driven by Robbie Close to win Race 2 (The NZB Airfreight Fillies and Mares Mobile Pace) by a neck. The daughter of Christian Cullen mare speared to the lead after drawing seven and was then three back the fence before being angled out soon after turning for home.

Rated 13/13 in the betting, Hello Adele paid $58.80 for the win, after unplaced runs at Nelson, Reefton and Westport.

“It’s the first time she’s done the whole Christmas circuit, she’d had some health niggles but really I didn’t know what to expect, ”said Phil Beveridge, “It was an absolute buzz….. my daughter (Georgia) came over from Westport and that was out of the blue, so it was special to have both my wife (Jill) and daughter there.”

Beveridge is a relative newcomer to racing having first started training in the 2019 season though his father trained gallopers, and his uncle Keith Beveridge was a harness trainer, with three winners between 1983 and 2016.

He now races in his uncle’s red and black colours because as a Buller man through and through he felt he had no option.

“Dad’s colours were red and white – and that’s the West Coast – so I couldn’t use them.”

The reason for Beveridge’s fierce parochialism is that he played 168 games for Buller as a tighthead prop and had many a battle against neighbours and arch rivals the West Coast.

The 47-year-old only gave the game away three years ago.

A one-horse trainer Beveridge is up as early as 4.45am and heads to Patterson Park before taking up his day job as explosives expert with Orica, one of the world’s largest providers of explosives and blasting systems to the mining and quarrying industries.

He acquired Hello Adele after seeing an ad on a website for a two-year-old filly, only to find out from her owner, long-time time harness racing supporter and car dealer Reg Storer, that the deal came with the bonus of her foal as well. He took both home.

“It was a two-for-one deal,” says Beveridge, “we had Hello Adele at home for 2-3 years at home until we weaned the foal.”

“He’s shown some promise right from the start and hopefully go to the races in the middle of the year.”

To date Hello Adele is the only horse he has taken to the races. As for post race celebrations it was beverage time for Beveridge, a few beers in the back seat of the car as his wife and daughter took charge of the three hour drive home.