As several people holding official positions on the racing club had strong interests in harness racing, it wasn’t long before harness races were included in the  Motukarara programmes run by the racing club prior to the formation of the Banks peninsula Trotting Club (BPTC) in November 1950. The first club president was Cyril E. Gray.

In December 1951 BPTC conducted its first equalisator meeting. Racing was reported as being “of a good standard, especially with the classy two-year-olds.” Winners on the day included Francis Gold and Rosehana, whose part-owner/trainer/driver K Chapman received a fine canteen of cutlery for taking out the main race. A future NZ Cup winner Our Roger came third. The equalisator did good business and the meeting bode well for things to come.

With BPTC’s first steps taken as an independent club, approaches were made over the next few years to the NZ Trotting Conference and the government to  support the Club’s bid to have a totalisator licence. Hoof Beats magazine ventured that the club was highly likely to gain a permit in the short term, reporting that “enthusiasm runs high in the district.” For whatever reasons, this support was not initially forthcoming.

A totalisator permit was eventually granted in July 1956 and the first tote meeting at Motukarara took place on 22nd December 1956. NZR Road Services put on buses from Christchurch and with the Little River Railway still operating, punters also came by train from town and Hornby. Entry to the course was five shillings. One of the leading trainers of the day WJ (Bill) Doyle won with his trotter With You. Perhaps the most notable horses to race, though without success, were the future broodmares Ladyship and Elsinore, dams of later stars of the track Lordship and Robalan respectively.

In the next season the BPTC’s annual meeting was moved to a date in early October that would become its regular spot for some time.  The club’s biggest race, the Banks peninsula Trotting Cup now raced in memory of club stalwart Derek Jones, Cup still runs on the October date in the calendar.

It was not long before the BPTC became the most successful one-day club in New Zealand with stakes being increased year by year and a corresponding rise in attendance and totalisator turnover, both on and off course.

The Club’s efforts resulted in recognition of its rights to additional permits. These did not come easily but when received, officials made a wise move to use the second permit, granted in 1977, between Christmas and New Year. This picnic meeting proved immensely popular with holiday makers, with the course being packed to overflowing.

Banks Peninsula Trotting Club continued to prosper and their efforts were rewarded with it having 3 full totalisator licences at the end of its first 40 years, with one of the first on-course only permits in New Zealand for use on a Sunday.

During this time, trial and Sunday work outs had become an important part of the harness racing at Motukarara. The adverse effect on the grass track of too many trials resulted in an all- weather track being constructed in 1975, initially as a training track, and in 1992 it was upgraded to be used fored for work outs and trials.

The Club has continued to grow from strength to strength and now holds six harness race meetings a year – all on the grass track. There have been many top line horses race and win at the Club’s meetings over the years including Sundon, Lyell Creek, Vulcan and I Can Doosit. In two of the last three years, Habibti Ivy and Habibti Inta have won our feature race the D.G. Jones Banks Peninsula Trotting Cup for the same owner, trainer and driver.

Motukarara Raceway is used regularly for harness racing workouts. The track is no longer used for galloping meetings, however the BPRC still conduct occasional trials on the course.

Current BPTC President, Wayne May says “while the Club wishes to stage exciting grass track harness racing and support the industry and all those involved, we are committed to providing an event for all the family to enjoy. There is plenty of free on course entertainment for the kids and we encourage people to bring their picnic and have a day out with family, friends or workmates”. 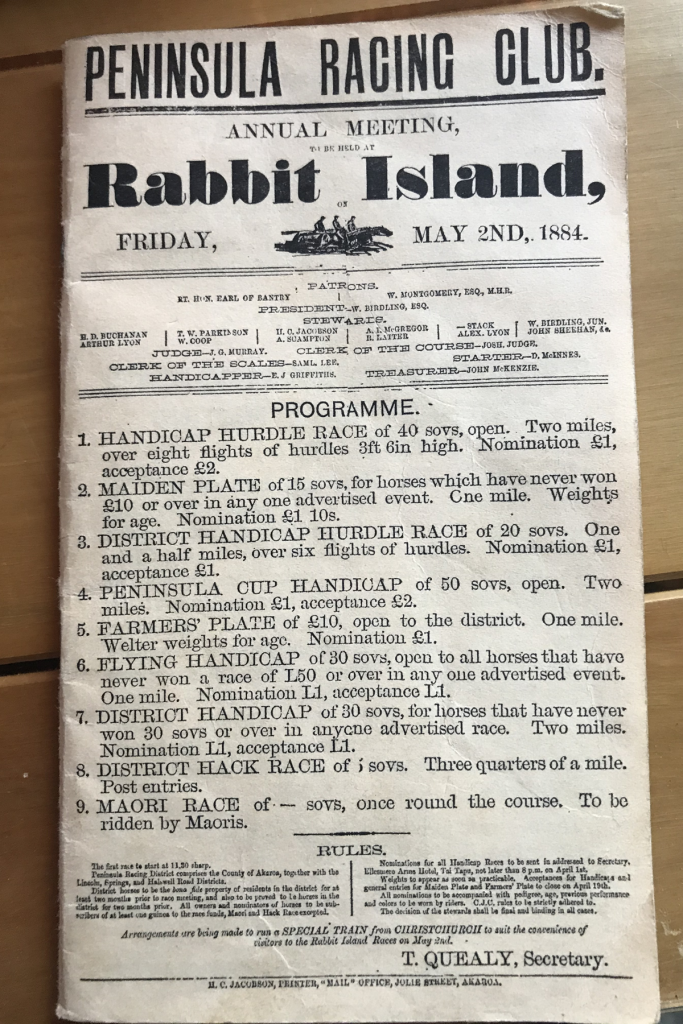 Programme for an early meeting of the Peninsula Racing Club at Rabbit island (Motukarara). No harness racing on the card yet. 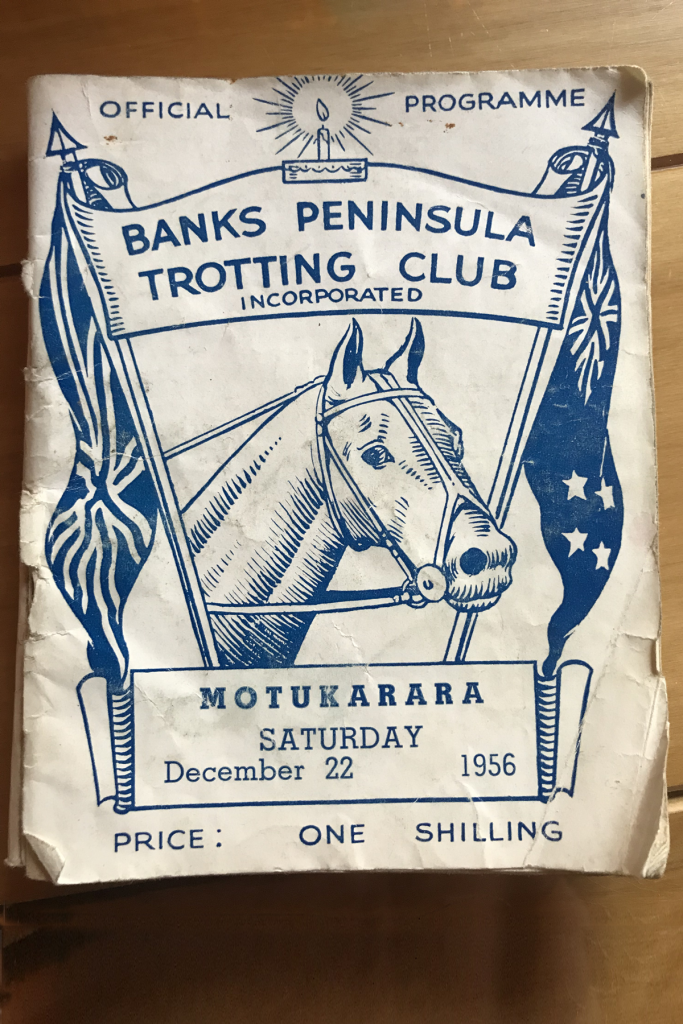 The first meeting of Banks Peninsula Trotting Club was held on 22 December 1956. 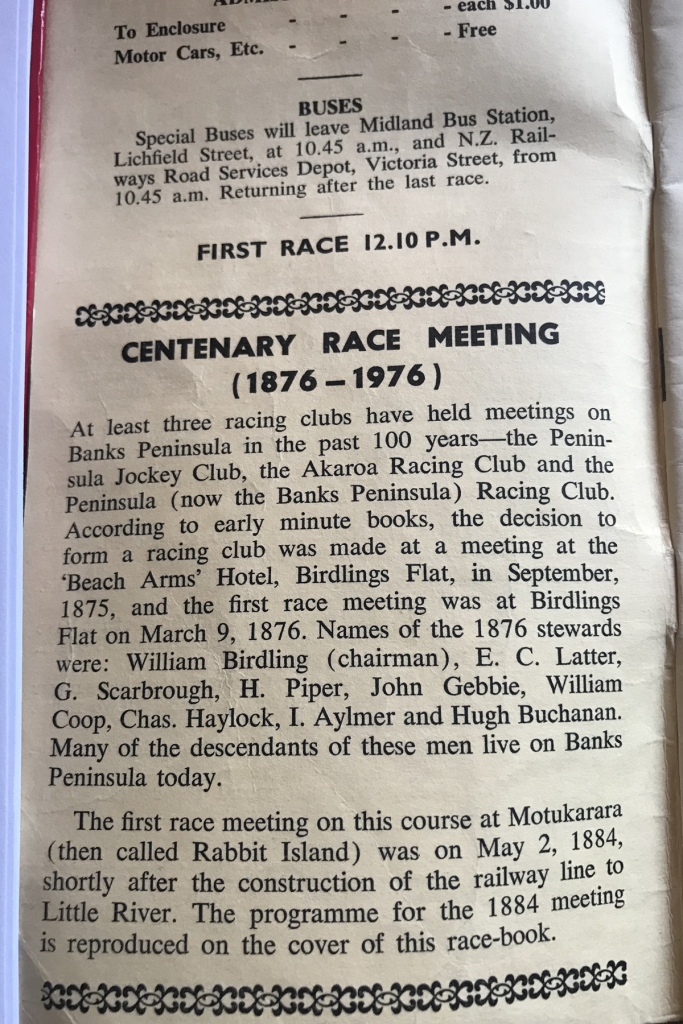 Historical snippets in the programme for the Banks Peninsula Racing Club’s centennial meeting in 1976.