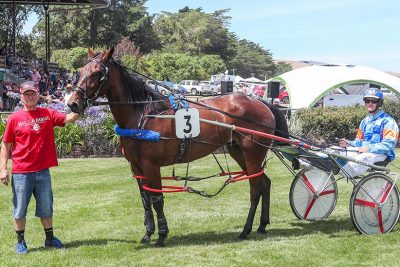 Robert David and Ross Cameron pose with Not Really Blonde after her win on debut.

The grass at Motukarara on Sunday was a happy hunting ground for some who hadn’t tasted victory for a while, if ever.

Westport trainer Phil Beveridge had his first win with Hello Adele winning at big odds while Waimate’s John Patterson trained and drove Line a Love to victory in race 1. It was his first win since Loose Cannon in May 2013 at Forbury Park.

Prebbleton trainer Robert David also trained a winner – his first since Eastwood Chieftain in 2014 – when Not Really Blonde won race 4, with driver Ross Cameron in the sulky.

And it was a good day for another driver called Cameron, with Alana Cameron taking out a double (Race 7 Jenabella and Race 9 Quarterback), both for in-form trainer Matt Purvis. A double went the way for Robbie Holmes too, training and driving Conquer Me and Sierra Gold in races 3 and 6.