Success at Motukarara for seven-year-old mare Sun Swinger in January was a fitting reminder of the Williams family’s contribution to harness racing and the Banks Peninsula Trotting Club over many years. 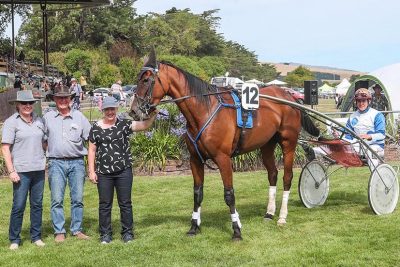 While trainer Kevin Williams is well known for his association with the ‘pocket battleship’ of the 1980’s Master Mood, wife Bonnie has been a stalwart on the BPTC since the 1990s. Active on the club committee and one of the first to arrive at pre-meeting working bees, Bonnie is a driving force for the Trots at Mot.

As the daughter of harness racing legend Cecil Devine, Bonnie was destined to have a life-long involvement in the sport. It was an uncle, George Mugford, who founded her family’s long association with BPTC. George was a typical early Mot man, a farmer and hobby trainer who pitched in at every level and became president in 1979. When he bred to Cecil’s NZ Cup winner Van Dieman in the late ‘50s, George named the resulting foal Lord Cecil. “That caused a family disagreement,” as Bonnie tells it.

“Banks Peninsula is a very much a family-focussed club,” says Bonnie, “that originated with the support of local people, most of whom had an association with horses and wanted to share their enthusiasm for harness racing.“

Kevin and daughter Kelly acquired Sun Swinger at the 2017 Roydon Lodge dispersal sale, knocked down to them as a qualified trotter for $500. She was bought primarily as a future broodmare, being by Sundon and a full sister to the successful All Shook Up (5 wins).

“Richard Aubrey took her home from the sale and trained her for us,” said Bonnie. “After 3 months work with her he suggested we send her to Greg and Nina Hope at the beach as she was not trotting quite right.”

“Greg had the mare trotting a lot better, but at the workouts she would not trot away and went at a snail’s pace,” Bonnie explained.  Another spell and another preparation at the beach saw slow progress. “So we just kept going with her ourselves and eventually she got the idea.” By this stage Aldebaran Lodge’s Duncan McPherson had joined in the ownership.

These days Bonnie does most of the work with Sun Swinger. “I’ve told Kevin it’s all very well out on the track in February, but I won’t be doing it any more in the winter!”

For her part Sun Swinger is now in foal to Muscle Mass. Her value as a broodmare is no doubt secure with the ongoing breeding success of her dam Shimmie Shook Shook, also producing All Settled Down (4 wins) which in turn left top juvenile trotter Enhance Your Calm.

Sun Swinger is coming to the end of her eventful career, one that with three wins to date has given her owners some real highlights along the way. None more so than in celebrating her latest success, and accepting hearty congratulations all round one January race day at the Mot.