Skip to content
BPTC Competitions: the finish line’s in sight

Following another successful harness racing meeting on 21 March, our competitions for performance on the track are one meeting away from conclusion. The 11-race card produced some very close finishes that had an impact on the respective leaderboards.

While not driving a winner, John Dunn collected a very useful nine points from four placings to take him clear in the race for leading driver. John leads with 56 points, 17 clear of last year’s winner Blair Orange, who will need to pull out all the stops when he’s back on the track Easter Monday. Matty Williamson leads the pack followed by Ben Hope and Ricky May. 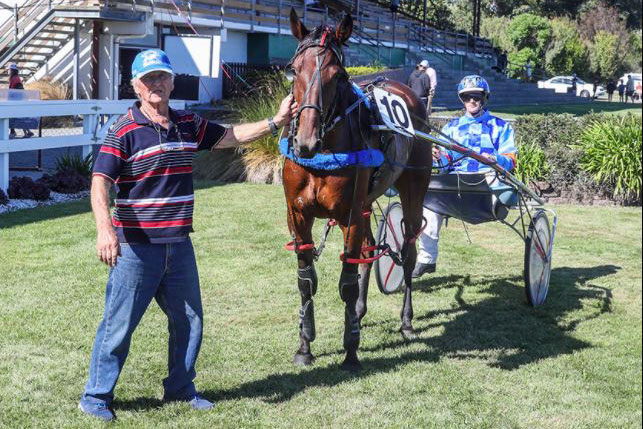 Not Really Blonde, pictured with owner/trainer Robert David and driver Ross Cameron, jumped into contention as Colleen Breen Memorial Filly/Mare of the year when winning at Motukarara on 21 March 2021.

Ben Hope still leads the Junior Drivers’ comp, now on 27 points after one placing Sunday. John Morrison has closed the gap to three points, while Sarah O’Reilly holds onto third another six points back. Alana Cameron had two seconds to move up the rankings, while Olivia Thornley won the junior drivers’ race on Key Reactor at a nice price.

With one minor placing Robert Dunn (30 points) extended his slim lead to three over Trent Yesberg. Last year’s winners Greg & Nina Hope edged into third on 22 points while Ken Barron and Matt Purvis are tied on 21. Any of these trainers, even some of the chasers led by Colin & Julie De Filippi (20) and Bruce Negus (19), could conceivably take the title with a big team and a top day on Monday 5th April.

With seven mares winning on Sunday and a couple of them club winners previously this season, the Filly/Mare of the Year competition is heating up. A second placing to add to two earlier wins allows Jenabella to remain in front on 13 points. Hello Adele and Not Really Blonde also now have a pair of wins and share second on 10 points. Aldebaran Floss added a victory to an earlier second to climb to 8 points and stay mathematically in the hunt.

All eyes will be on Easter Monday 5th April, our last meeting of the season, to see how these races will end.