Skip to content
First win for Devon van Til

First win for Devon van Til

Junior reinswoman Devon van Til signed off in the best possible style for former employer Robert Dunn, winning her first race in her last drive for the dual-Island trainer at Motukarara Raceway on Monday.

Van Til pressed forward early with stable runner High Flying Harry from his wide barrier in the McMillan Feed Barn – Trainer Of The Year Mobile Pace (2000m). While posted three-wide early on, High Flying Harry continued to improve until he found the parked position and subsequently handed up to Archman to sit in the one-one.

Van Til was able to navigate her charge into clear running room down the straight where he was able to run away to a three-quarter of a length victory over Caesar’s Quest, with a further neck back to Duffy Hollow in third. 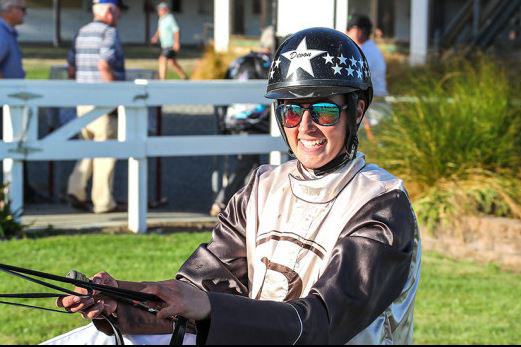 While van Til has been in consistent form this season, placing in six of her previous 13 starts, she was pleased to finally get the monkey off her back with her first raceday victory.

“It was great to get that first win under my belt and hopefully it is the first of many,” she said.

“I have been fairly consistent and thereabouts, I just needed a little bit of extra luck to get there.”

Van Til said High Flying Harry wanted to burn off the gate, so she went with it, and her decision paid off.

“He still wanted to go forward at the start, so I went with him,” she said. “He has been going very well and I just changed a little bit in how I drove him at the end so he could finish it off.

“I was really stoked for him.”

The victory was made even more special having achieved it for employer Robert Dunn.

“It was really awesome to get the win for Robert,” she said. “That was my last drive working for Robert, but hopefully I will be good enough to drive for him again one day.”

Having previously had a background with sport horses, van Til elected to change tack a couple of years ago and try her hand in harness racing.

“I have been working for Robert for about two and a half years,” she said.

“I used to be an equestrian rider and I wanted to change things up and go into harness racing and they took me on, they have taught me everything I know.

“I have ridden since I was a kid and I have always enjoyed it. I was very competitive and I was lucky that I had supportive parents that kept me going through the years with showjumping and hunting.

“I just wanted a bit of change in my life and change in scenery. I managed the equestrian centre for Davey Butt at Woodend, so I already knew all of the fellas at the beach.

“I knew Johnny (Dunn, stable foreman) needed a bit of help, so I went and gave them a hand and I was asked to stay on.”

Van Til said she will now take a bit of a break before working out her next steps.

“I am going to have a bit of a holiday and help out my partner Steve (Dolan, trainer) for a little bit,” she said.

Having attained her first raceday win, van Til said she is now on the hunt for 14 more in order to drive on premier nights.

“I really want to try and get those 15 wins while I am a junior so I can drive on premier nights,” she said.