Skip to content
Grasstrack racing going from strength to strength

Grasstrack racing has been a massive success this season , and there will be even more meetings in 2021/22.

The dates calendar was released last week and it has 38 grasstrack meetings next season, including three dual code meetings. That’s an increase of four on this season, and includes the return to Hawera in Taranaki. Their two meetings will be held over Waitangi weekend (February 4 and 6 2022). 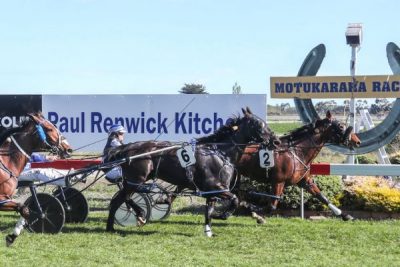 There will be two other North Island meetings at Wairarapa and Kapiti, and 34 in the south.

Mt Harding at Methven and Motukarara will be the busiest grasstracks in the country with seven meetings each next season while Westport gets three and Geraldine doubles its quota to two.

Gore will also race on the grass twice, as will Oamaru, and the Forbury Park Trotting Club at Wingatui.

Methven hosted the last grasstrack meeting of the season on April 26.

Methven Trotting Club president Mark Lemon is reasonably happy with next season’s allocation saying “we can handle one meeting a month” though he thinks nation-wide there is still potential to have even more grasstrack meetings over the warmer months.

“We should be having a meeting on every Sunday – and we are not doing that.”

Grasstrack racing’s popularity with the punter is well known.

This season for instance Methven turned over more than a million dollars at five of its seven meetings, with a best of $1,565,647 on October 11. The Hororata Club’s meeting there also did $1,132,720.

Mark Lemon : “When you add it all up it was over $9.5 million at Methven … the only two we didn’t do a million on were the two when we only had nine races.”

And Lemon says having big open races is the key.

“We are very conscious of carding races that get full fields… we don’t have favourite-dominated races.”