The pandemic may be casting its shadow over community activities, but at Banks Peninsula Trotting Club we’re gearing up for an exciting new grass track harness racing season regardless. Our first race meeting of six scheduled for 2021/22 is barely five weeks away. 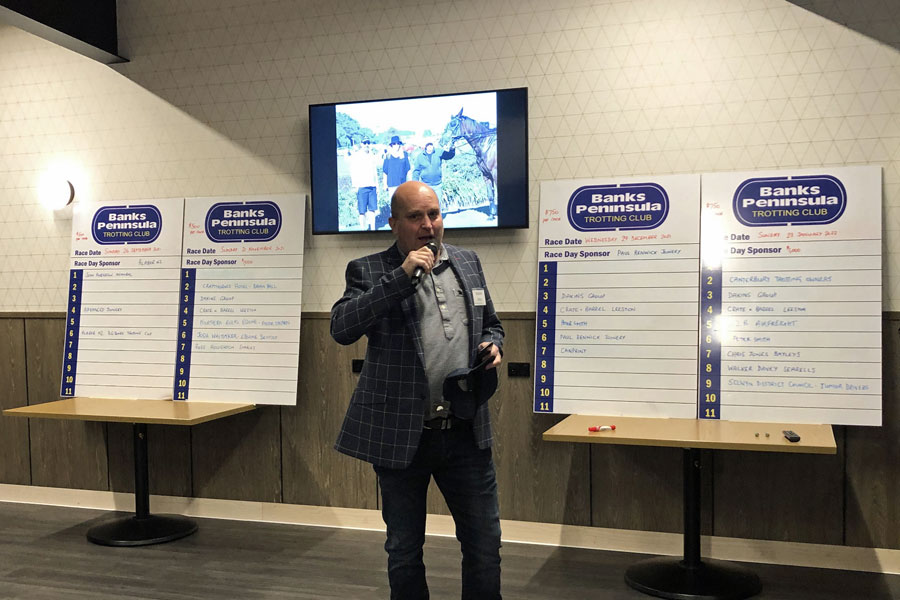 President Wayne May with introductions. Behind him the race sponsors boards are filling up!

The Club’s annual Sponsors’ Function returned in July, with around 120 people attending a lively function at the Hornby Club. This is our opportunity to thank past sponsors and invite continued support, and the event was a resounding success; to the point that only three of our planned 60 races in the new season remain without a naming sponsor! That’s an extremely satisfying result at this stage, particularly in light of the uncertainty Covid brings.

Outgoing club president Wayne May introduced the evening, welcoming everyone and reflecting on the past season. Wayne noted that betting turnover exceeded $1 million at every BPTC meeting in 2020/21. There are many factors that go to make a successful season, and that is certainly one of them!

Our September race day features the G3 Banks Peninsula DG Jones Memorial Trotting Cup, once again to be sponsored by Alabar NZ. The club acknowledges the loyalty of all our sponsors, many of whom have been supporters for years. We also thank new sponsors who have come on board for 2021/22.  Be assured of our commitment to doing all we can to make your day at the races a success al round.

The Sponsors’ Function is also the place where we celebrate on-track success in the season just gone. All the winners in BPTC’s famous club competitions were recognised, awards made and prizes handed out. 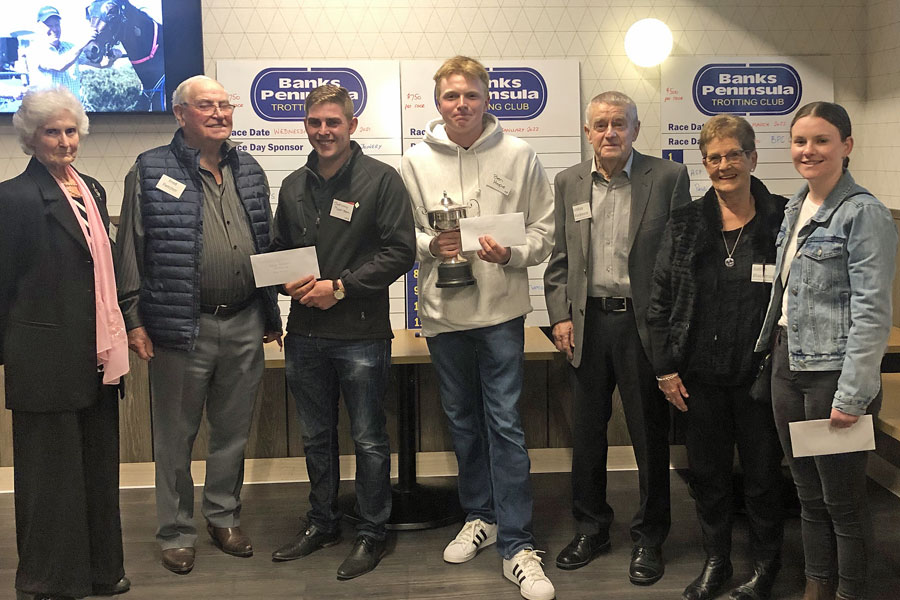 Ben Hope once again took the top prize for Junior Driver success, and he along with placegetters John Morrison and Sarah O’Reilly were on hand to accept recognition from Club patron Lindsay Blackmore. Lyndsay and his wife Judith along with Fred and Faye Fletcher sponsor the Junior Drivers’ Awards. It was pleasing to see so many young drivers accept our invitation to attend, where they added much to the event’s success.

Dunn family members took out the 2020/21 Trainers and Drivers competitions, and while neither Robert nor John could attend, they were ably represented by Nigel Armstrong and Korbyn Newman respectively. Nigel talked about his syndicated mare Spellbound’s recent racing in Australia, putting much of her success down to her NZ trainers the Dunns and their forward planning for the horse.

The Colleen Breen Memorial Filly/Mare of the Year Award was won by the Matt Purvis trained Jenabella, with part-owner Will Jennings on hand to accept the trophy. Jenabella won twice last season at Motukarara, also earning points for a second to clinch the comp.

So on to 2021/22, hoping like everyone in New Zealand that Covid won’t get in the way of an exciting season, where the community comes out in force to enjoy the race day action at Motukarara, the home of grass track harness racing.