Skip to content
Mot and the Interdoms: the Lochgair link

We’re counting down until the grass track harness racing resumes at Motukarara, with Banks Peninsula Trotting Cup Day kicking the season off on 26th September. The feature event as always on opening day is the Group 3  event for the trotters.

Now known as the Majestic Son DG Jones Memorial Trotting Cup, this race has been won by some top trotters over the years. Names such as Johnny Gee, Nigel Craig, About Now, Sundon, Lyell Creek (twice) and I Can Doosit grace the roll of honour.

Among all the stories shared and collected around this race, one that’s been a country harness racing club highlight for over half a century, one that’s quite unique is the one about the silver tray presented to our Cup winner to this day.

When Call Me Now took out the 1994 Cup in the hands of David Butt, the stallion’s owners received the Cup that Mr C.E. (Cyril) Gray had donated back in 1965 for the inaugural running. But that wasn’t all the silverware polished up for the day. For the first time that magnificent silver tray was also part of the presentation, gifted by Mrs Kura Lowe of Ashburton. 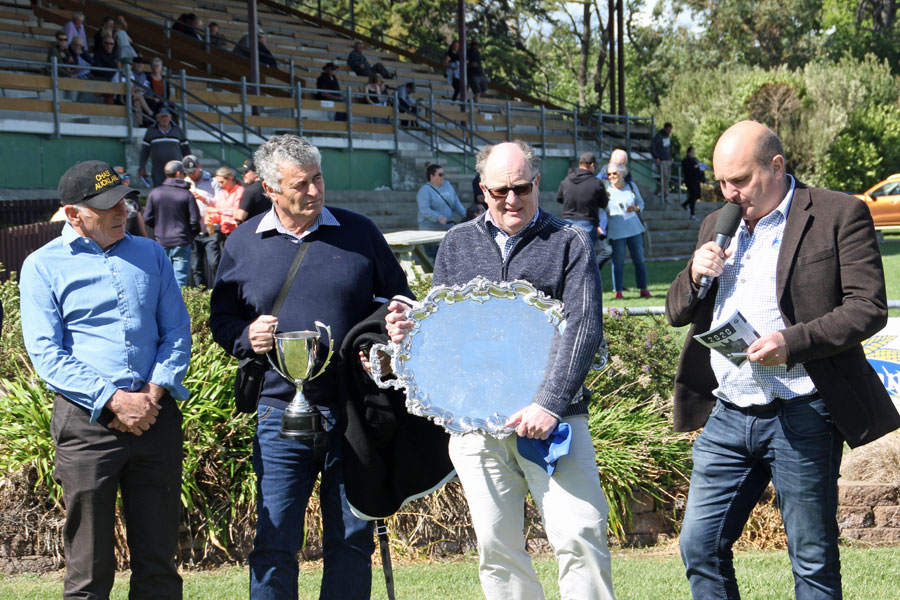 There is quite a story behind that particular piece of silverware. Its origins date back to the Interdominion Championships of March 1965, which took place at Forbury Park for the first, and only time.

The Interdominions were held in the South Island that year only because the Auckland Trotting Club was financially unable to run the event. The Dunedin club stood up when needed. With that in mind, there is some irony that economics was the reason harness racing at Forbury Park ended for good in July 2021.

The Dunedin Interdominions are best known for the delayed declaration of a dead heat between Jay Ar (George Noble) and Robin Dundee (Doody Townley) in the Pacers’ Grand Final. The race that followed that incident had no such confusion. But it was the forerunner to a connection with Motukarara that lives to this day.

Forty minutes after the Jay Ar/Robin Dundee debacle, the second Pacers’ Consolation was run and won by the Derek Jones trained and driven Lochgair. For their win, owners Stanley and Mrs Kura Lowe were presented with a trophy valued at fifty pounds, donated by Dunedin’s popular Branson’s Hotel. That trophy was the already mentioned silver tray, which Mrs Lowe would 29 years later gift to the Banks Peninsula Club for presentation to the winner of the Trotting Cup.

Lochgair was a more than handy horse with 12 wins and 10 placings from 72 starts, in an era that boasted some of the best equine talent New Zealand has produced. He was often driven by the great D.G (Derek) Jones, a BPTC stalwart whose name is memorialised in that very same race that Mrs Lowe’s silver tray is now a permanent part of.

Stan Lowe, brother of Hinds trainer W. E. (Ted) Lowe, died in September 1965, days before one of Lochgair’s best victories. In the Hannon Memorial at Oamaru and driven by Bob Young, Lochgair scored a brilliant front-running victory from Disband (driven by Derek Jones) with Waitaki Hanover third. Backmarkers Robyn Dundee and Lordship on that day were given no chance by Young’s daring tactics.

Lochgair ended his race career at the 1968 Auckland Interdominions, still in Mrs Lowe’s ownership. After standing at stud for three seasons in NSW, he returned to Ashburton and Frank Bebbington’s Avalon Stud, at a service fee of $200.

As a sire Lochgair received little support, with Ariemore (six wins) the pick of his progeny on the track. His most significant legacy is through the deeds of Merinai, winner of 19 and $244,000 in the 1990s. She was by Tuff Choice out of the Farm Timer mare Meriden, whose dam Merinda was by Lochgair. It is no surprise that a son of the immortal Light Brigade should be to the fore in the bloodlines of a great trotting mare.

Lochgair never raced at Motukarara. But the Lowe family has certainly had success here over the years, right down to the current generation. In 1962 Cairnbrae (Ted Lowe) won the club’s feature race on that same spring season-opening day. That was the BPTC Handicap, which would three years later be moved to make way for the Trotting Cup. Cairnbrae went on to win the NZ Cup in 1964, then trained by Ces Donald for Mr Lowe.

The people, the horses, the places; the trophies that signify success and are crafted to outlast us all. The fabric of harness racing is woven with many fascinating tales from our past, none more readily recalled than those that give relevance to events of the present.

Thanks to John Nielsen for historical background material