1967 provided another strong, near capacity field to face starter, Mr R.F. (Ron) Carter at the mile and a half dispatch point. 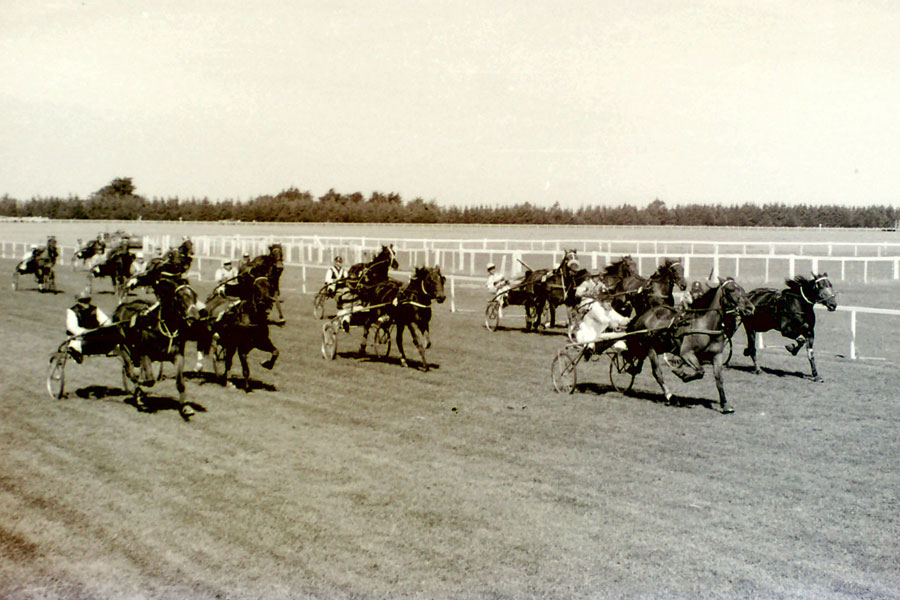 Stylish Major has half a length to spare over the fast-finishing Logan Count out wide. Dispense closer to the rail is 3rd.

Mighty Chief was back, this time the handicap a prohibitive 42 yards. His connections had followed a similar path of preparation for the contest, one that had served the gelding well, in the first two editions. He had shown to advantage when fresh and had several trial runs to secure his fitness for this year’s race. Better luck in the early running would assist the locally trained runner the opportunity to improve on his two unlucky seconds.

Queens Cord and the Leeston owned and trained mare Break Through were both handicapped on the 24 yard mark. Tronso shared the 18 yard mark with the unreliable Doctor Kyle. Last year’s winner formed a tote bracket with stablemate Mighty Hanover. The Colin Berkett trained pair were closely related. Mighty Hanover was a son of former top race mare and broodmare gem Betty Maxegin. Another of that mare’s offspring was the unraced Bettagain, the dam of Tronso. Betty Maxegin was also represented in the, 2.19 class trot, by the back marker Rapparee. The aged son of Super Note, found the 48 yards too much to overcome however, and he was unplaced.

Favouritism in The Cup was the domain of the C.C. (Clem) Scott trained brother and sister bracket, Stylish Major and Le Chant. The mare was making her first appearance for the season. That was considered unlikely to be problematic, as she had raced well in the past, in a similar condition. A more significant concern for driver R.M. (Bob) Cameron was the 30 yard handicap.

French Pass became the first North Island trained runner to accept the challenge of encountering the south’s best on the Motukarara turf. C.S. (Charlie) Hunter venturing south from his Upper Hutt stables with the gelding by Stormyway. Mr R.A. (Roy) Mckenzie’s squaregaiter had been presented at the National meeting, and had been victorious on the first day. The official racebook incorrectly described the 6Y.O. as an entire, however his career record correctly details all his race starts to be that of a gelding. 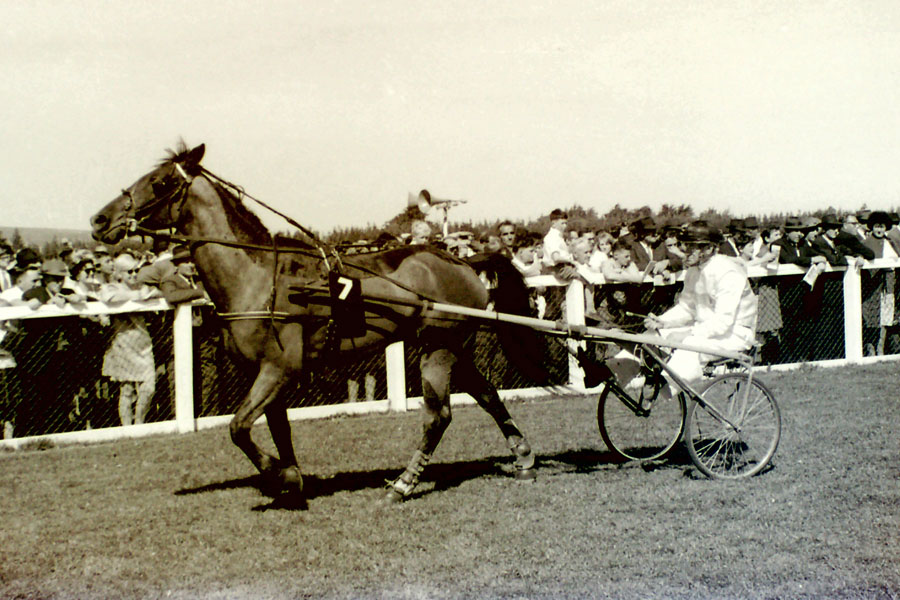 Stylish Major and Ken Balloch return to the birdcage victorious

It was the consistent Stylish Major who gained a well deserved winning turn, following consecutive second placings at Addington in September. He was also an acceptor at Forbury Park, but that assignment bypassed in favour of a front line draw on the grass. The 6yo Flying Song gelding was handily placed all the way by visiting Southland driver K.M. (Ken) Balloch. The experienced horseman enjoyed a great day, having scored in a division of the previous event with the consistent Wyndham trained Valley Girl.

Luck may have been on the side of Stylish Major however, as the Greenpark owned and trained Logan Count appeared destined for victory before breaking when sustaining a powerful run down the outside of the track. Driver F.E. (Felix) Newfield returned Logan Count to his gait, and he closed very quickly to within half a length of the winner, at the post.

Stylish Major went on to become the greatest stake’s winning trotter to race in this country. He was then subsequently reunited with Le Chant who had been leased by the pairs’ owner Mr Norman Campbell, to race in the United States

D.G. (Derek) Jones appeared in the finish for the first time, when Dispense ran right up to her best form in finishing third. Jones had given his mare a lovely run handy to the pace and she fought solidly in the straight for her part owner. Tronso, who was back in about tenth place starting the last half mile, came home very strongly for fourth a neck back. She pleased Jack Carmichael who was again her driver this year. Gala Song, who had appeared a possibility half way down the straight, could not quite see it through. She finished fifth, two lengths further afield. Russell, who made a game attempt to lead throughout for S.D. (Steve) Edge,  tired in the run home and finished in behind the major place getters.

Mighty Chief, the second favourite, broke at the end of three furlongs. He was closest at the finish, but his performance was not without merit, as he made up a lot of ground over the last half mile and appeared in tight quarters near the finish.

The following event, the Waihora Handicap was a race in two divisions for the 2.20 class pacers. Little River trainer E.M. (Eric) Ryan produced the Smokey Hanover mare Limbala in a fresh state. Unfancied on the Tote, and starting 24/24 in the betting, the 6yo returned the sensational place dividend of $55.60, after finishing second. Ryan would go on to create his own piece of “folklore” in the fabric of trotting in the catchment.

Earlier, on Saturday 6th May 1967, The Banks Peninsula Gymkhana Club conducted its inaugural meeting. The eight race programme catered for maiden and moderately assessed horses together with 2yo, 3yo, and 4yo  races.  In addition there were the usual novelty events, pony races, egg and spoon races, and even a sheep guessing contest. 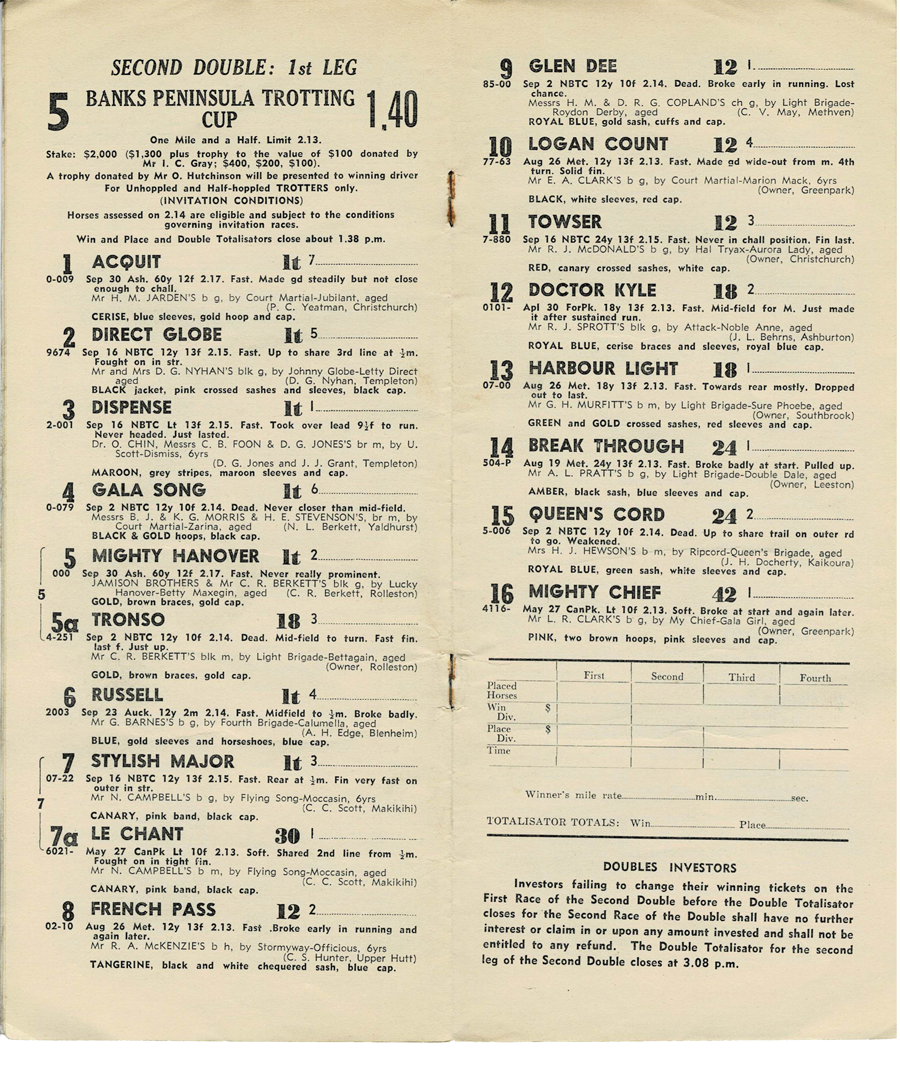 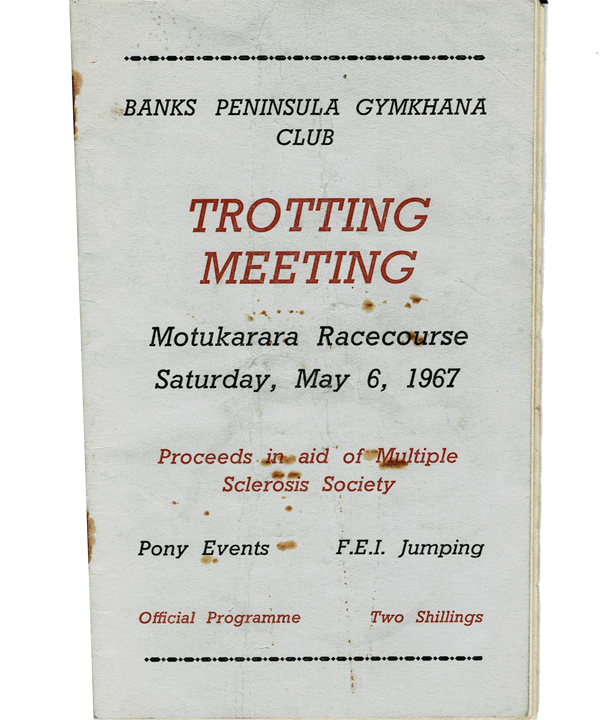