W.R. (Wes) Butt eyed the prize with his two aged stallions Johnny Gee and Tony Bear. The former was having his first start since the National meeting in August, where he recorded a second and third placing. His tendency to run in almost certainly cost him victory in the second of these outings. He suffered a setback soon after but indicated he had recovered with a bold showing at the Ashburton trials. 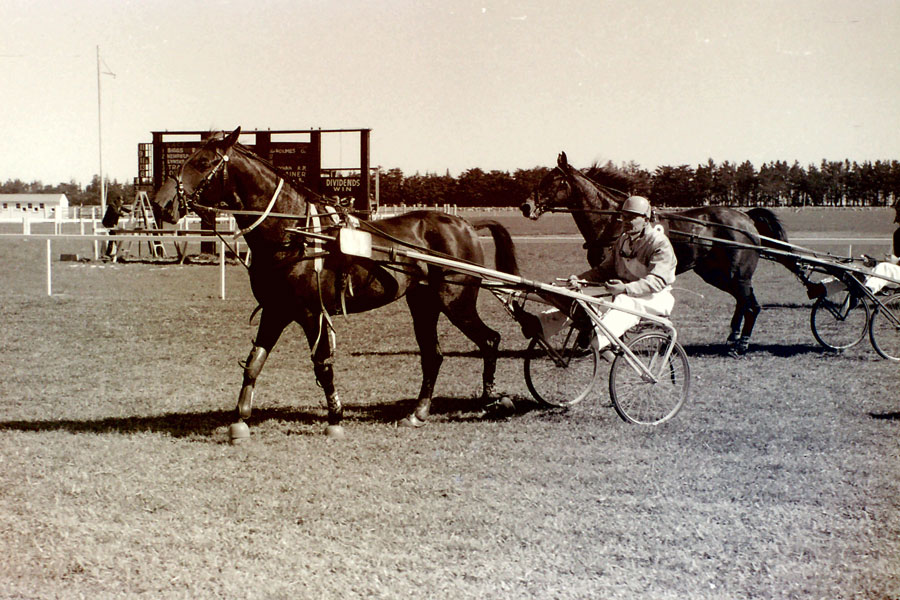 Tony Bear the former Australian trained trotter had remained in New Zealand following the Inter Dominion series in Auckland, earlier in the year.  In his stablemate’s absence in September Tony Bear had returned to winning form at the New Brighton meeting. He too had been prominent in the Ashburton trial, won by Stylish Major.

Rolleston trainer Owen Quinlan held a strong hand with the consistent types Aronmot and Uteena. The latter, a U. Scott mare, had recorded two thirds in her three starts since resuming. She warranted consideration even from the 24yard mark.

Logan Count was back, attempting to go one better than when runner up to Stylish Major in 1967. Fresh this year were the mares Harbour Light and Tronso.

Denis Nyhan was there in the famous “Black with the Pink crossed sashes.”  The capable Direct Globe, a gelded son of Johnny Globe his responsibility.

Bold Axworth a gelding by Masterpiece, had completed an impressive double at the Hutt Park meeting in September. This however was a much tougher assignment. D.C. (Doug) Watts was engaged, replacing Derek Jones who was committed to his own mare Dispense.

Race day dawned fine and the track was described as holding. The Butt trained bracketed pair, expected to be the hardest to beat, were installed a firm favourite on both machines. That support fully justified as Wes Butt and Johnny Gee saluted the Judge Mr Max Mace ahead of Logan Count.

The Greenpark-trained runner Logan Count had assumed control at the half mile, and sprinted clear on the home turn. He still held a handy lead at the furlong, and was far from disgraced in running second. It appeared however that he may be destined to be only a placegetter in his local Cup.

Johnny Gee trailed back on the fence in the third or fourth line, just inside and behind his stablemate. His trainer an extremely capable horseman, found racing room soon after turning for home. He was however content to wait until late in the piece before asking for the ultimate effort. The horse repeated his inclination to run inward, however his experienced driver didn’t bustle the son of the immortal Johnny Globe, and he kept a reasonably straight line to win going away. Butt had assessed that the entire was at his most effective when left for one late run.

Tony Bear endorsed his last start winning run by taking third place for R.D. (Robin) Butt, two and a half lengths behind Logan Count. He was proving to be a great money spinner for his Melbourne owner Mr J.T. (Jim) Smith.

Stylish Major, three wide in the middle stages for D.J. (Doody) Townley, battled on well after appearing a real threat on the home turn. The 30 yard handicap and being forced to race three wide for much of the last mile probably took its toll.

Direct Globe was next to finish, ahead of Tronso, who weakened after making the pace from the mile to the half mile. Uteena, Bold Axworth, and Dispense headed the rest. Outsider Russell failed to complete the journey after being pulled up by driver J.D. (Jack) Litten.

His Nibs, a 4yo maiden pacer by Caduceus, delivered a promise of what was to come when he prevailed in a tight finish in the opening event. Out of the Light Brigade mare Atone, he was of course a younger half brother to Johnny Gee. It was one of two winning catch drives for Denis Nyhan on the day. A month later His Nibs and Johnny Gee won the consecutive races immediately following Humphrey’s victory in the New Zealand Cup at Addington.

Johnny Gee, who was owned by his trainer, thus secured his first victory since he scored in a heat of the Inter Dominion Championships at Auckland in February. On that night he beat subsequent Grand Final Champion Stylish Major by the barest of margins.

Ironically Johnny Gee was a failure as a pacer, and it was only as a last resort that Wes tried the colt as a trotter. He took to the gait winning the 3YO New Zealand Trotting Stakes at his second start at odds of thirty five to one.

As a result of running first and third, the favourite bracket paid $3.70 for a win, and $2.80 on the place machine. The return represented exceptional value for each way punters.