In 1971 the Club fully embraced commercial sponsorship. In return for gifting a stallion service, participating Stud Farms were allocated naming rights for each event on the card.

That entitlement was added to the winning purse received by owners. At $300.00 the service to Lordship, donated by Mr and Mrs D.G. (Don) Nyhan, was the highest valued, and appropriately attached to the Banks Peninsula Trotting Cup.

Almost the entire field of twelve was given some chance of winning the race. Most popular selections included the principals of last year’s finish Merrin, Precocious, and Waterloo.

Although Merrin hadn’t won a race this season, his placed performances suggested that a victory maybe close at hand. Felix Newfield had driven the gelding at Addington, following Bob Young’s retirement at the end of the previous season. Precocious had recorded victories at The New Zealand Metropolitan and New Brighton meetings respectively. 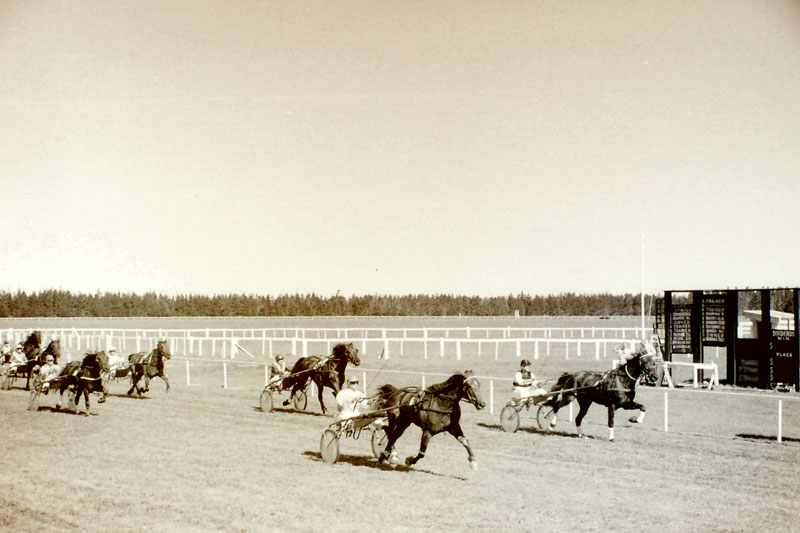 Waterloo had delivered improved efforts at Wanganui after being unplaced at Addington. Owner trainer Colin Berkett pursued a similar spring programme, to that which he adopted last season with his charge. On the first day the Light Brigade gelding prevailed over the hot favourite Tony Bear and appeared to relish the soft grass track. On the second day he was narrowly beaten by Easton Light, after giving that runner 24 yards start.

Going, who was considered unlucky when fourth last year, had completed a sensational first up effort at Ashburton. After conceding starts of up to 60 yards, she came with a brilliant late run to win narrowly over a mile and a half.

The 8yo Marius, exceptional when at his best, had been far too good in the Ordeal Cup winning by three lengths. Then there was Al Mundy, scheduled to be driven by his trainer A.J. (Ginger) Bourne. The Flying Song gelding was up in class but all indications suggested that he would measure up.

The consistent entire Tony Bear was rated a strong each way prospect, even from 36 yards behind the limit, however fellow backmarker Light View had disappointed at Wanganui and wasn’t a certain starter.

Bambi made his usual brilliant beginning when the tapes flew, and settled down in front of Johnny Fling. The Forward gelding, handled by owner R.S. (Dick) Caskey, attempted to lead all the way. 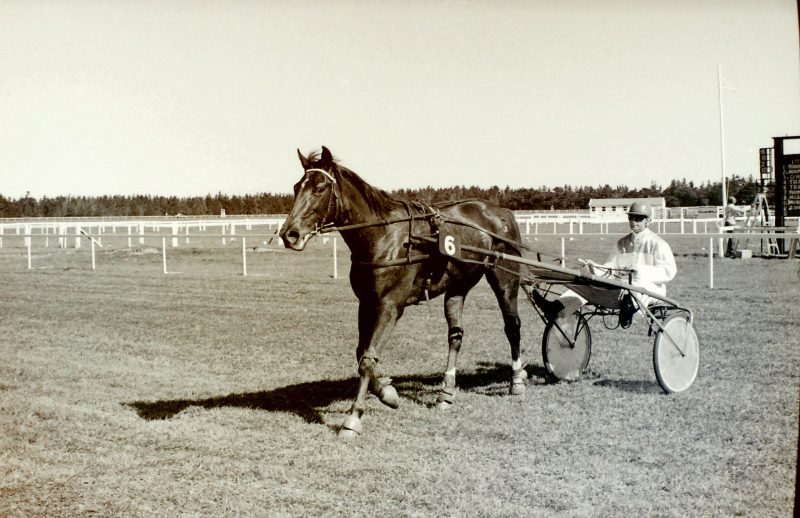 Doody Townley brings Cup winner Going back to the birdcage

Maurice Holmes replaced Ginger Bourne behind Al Mundy. However he and Dingle Bay both ruined their chances by galloping at the start. Marius broke badly after two furlongs.

Meanwhile Doody Townley had Going three back on the fence enjoying a lovely trail. The Tinwald horseman produced the mare at the furlong, and she ran on best to beat Merrin, another who had been back on the rails. L.C. (Leo) May completed driving duties after Newfield opted for Forbury Park.

Bambi fought on strongly in the straight, to finish third. Precocious battled on in fourth place, after being well back early. Johnny Fling was unable to fully capitalise on his run in the trail, being the next one home.

In claiming the spoils, Going reinforced one of the most significant breeding crosses of the era. A product of the last season at stud by the outstanding Light Brigade, she was out of Circlette, a U Scott mare. She was bred by Mrs D.A. (Denise) Nyhan, a daughter of the owner and wife of Denis, who prepared several other descendants of this family.

The aged mare consequently presented owner trainer Bill Doyle, with his second Banks Peninsula Trotting Cup. Although unable to drive himself having reached the compulsory retirement age of 65, Doyle praised Doody Townley for his handling of the chestnut. “She finished fourth last year, but should have won. An error of judgement on my part cost her the race,” he claimed. In addition, Doyle announced at the presentation, that he would donate $100.00 of the stake money to the 1974 Commonwealth Games Fund.

The racebook available to on course patrons was a large, glossy covered document. As was the case with such publications of the day, it was economical in terms of historical, statistical punter information. However it contained a glaring error in respect of the winner. The mare was incorrectly described as being by Light Brigade out of Passive. Ironically, her details were displayed accurately in the racebook the previous year, when she ran fourth.

Mr R.E. (Reon) Murtha became the Clubs commentator, taking over from the legendary Mr D.B. (David) Clarkson, who was accorded Life Membership of the Club.

The race immediately preceding the Cup was a maiden race. One of the runners in the capacity field was a Thurber Frost mare named Belmer Lady. The 4yo was trained and driven by Methven horseman M.A. (Murray) Watson.

Unfortunately the thirty five year old was dislodged from the sulky soon after the start and thrown against the running rail. The seriously injured reinsman was transferred to Christchurch Hospital for treatment. Tragically, he died two days later from the injuries sustained in the accident. He was survived by his wife L.C. (Lorraine), who made history in 1995 as the first woman to drive in the New Zealand Trotting Cup. 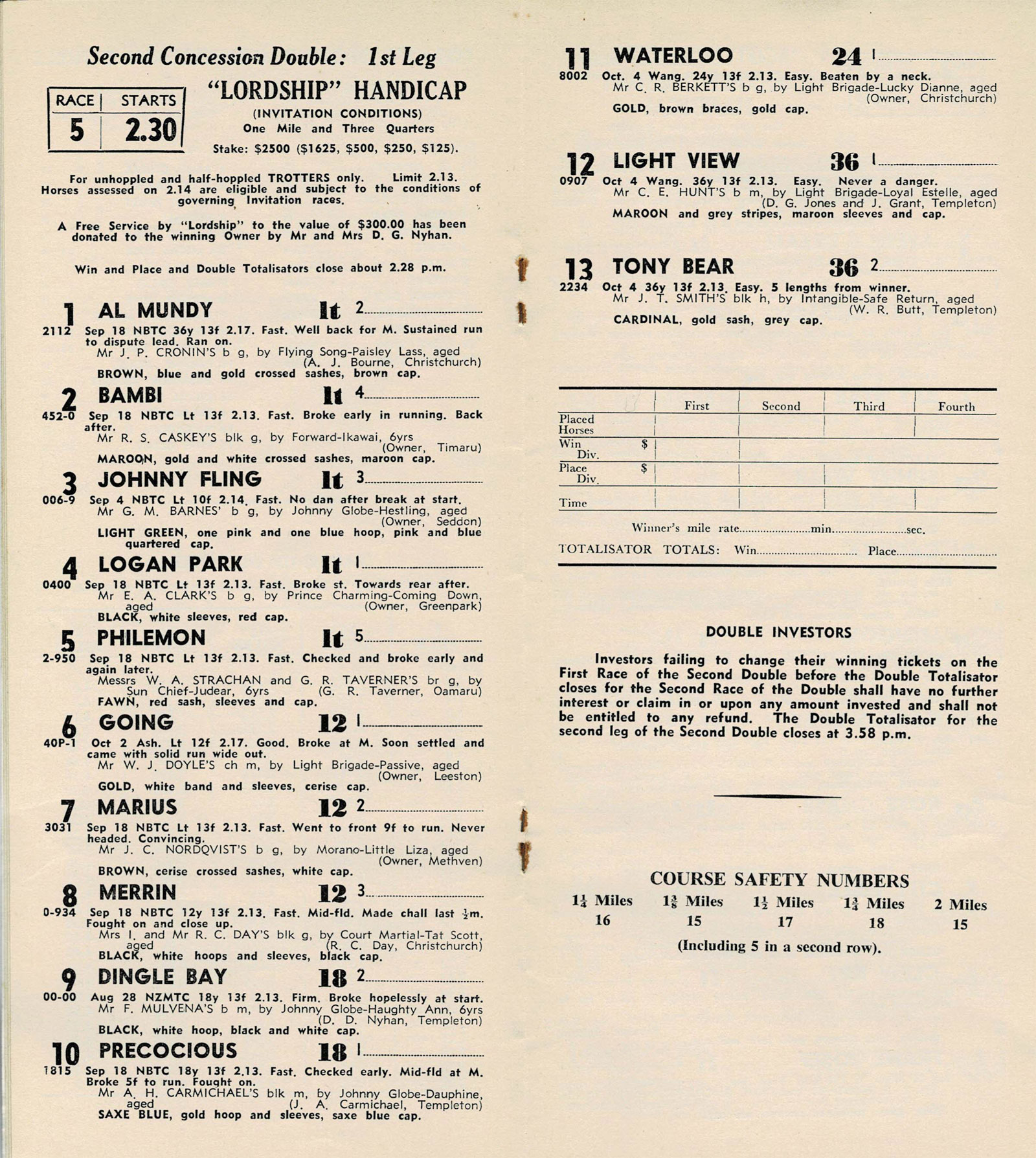