Skip to content
When Lyell Creek came and conquered Motukarara

On 26 September 2021 the tapes will fly for the 57th time on the Club’s flagship event, the Majestic Son DG Jones Banks Peninsula Cup.

Back in the day the race drew the very best trotters in the South Island, occasionally attracting North Island visitors as well. Today many of the top performers stay away from the grass, but that hasn’t detracted from the race’s significance to the racing calendar down the years.

In 1999 a very special trotter lined up in the then-named Canterbury Draught Banks Peninsula Trotting Cup. A big increase in stake that year to $21,000 ensured a top field of form runners. Nevertheless, Lyell Creek stood out.

Two years earlier Lyell Creek, by Roydon Glen from a Noodlum mare, had qualified as a pacer for his Kaikoura breeder PH Smith, before quickly showing a preference for trotting.

A rising star stamps his class

By the spring of ‘99 Lyell Creek had been purchased by the harness racing identity Graham Bruton and was in the hands of West Melton trainer Tim Butt. He’d swept all before him coming up through the grades. And he’d shown a liking for grass, already a winner at Motukarara and taking out a rare double on the Trentham turf. 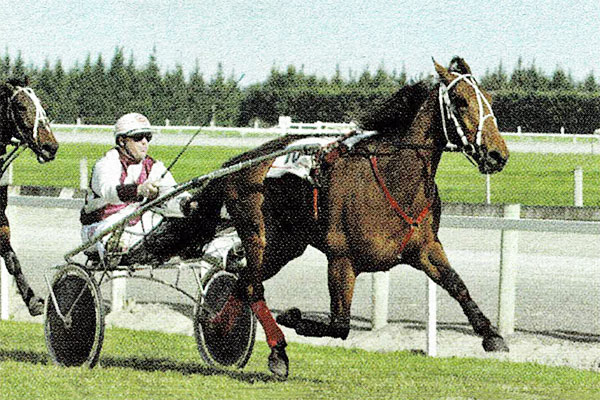 Lyell Creek powers to his first Banks Peninsula Cup with at Motukarara, October 1999.

Lyell Creek’s first assignment against the best trotters in the South would be his toughest test to date. It was one he passed with flying colours, taking control a lap from home in the hands of Anthony Butt and winning with ease from Now Another Look and Sungait Reb.

The winning time of 3.42.2 was a new race and track record. Lyell Creek became the hottest favourite to win the race, and history would prove the $1.75 dividend a generous return.

At the 1999/200 season Harness Racing Awards, Lyell Creek would sweep all before him just as he had done on the track: 5yo and over Trotter of the Year, Trotter of the Year and Horse of the Year. In taking that last-named trophy, he emulated his pacing sire Roydon Glen, who received the bouquet in 1985.

With a healthy stake and a front mark of C6 assessment, the race was still attracting the top guns to the big grass track. Lyell Creek had won the last Inter Dominion championship and the 1998 winner Buster Hanover was also lining up. Lyell was the raging favourite and not expected to be too inconvenienced by his 30 metre back mark.

Making ground steadily from his handicap, the champion took control at the 1100 metre mark. From that point on it was just a procession. Lyell Creek’s official margin was four and a quarter lengths over Jay Bee Ar with the same distance back to One Kenny in third place.

Driver Anthony Butt, who appeared in the racebook as a part owner of the horse with Graham Bruton, confirmed the ease of the victory, quoted as saying “he was never out of second gear.”

The race provided exactly what the punters expected. The reigning champion of the square gait returned $1.10 for a win and money back for a place.

Lyell Creek’s second Banks Peninsula Trotting Cup victory was his 20th including three is Australia. He went on to also race in Scandinavia and North America, amassing 56 wins in five countries (15 Group 1s), and nearly $3 million in earnings.

His last race was the 2005 Rowe Cup as an 11-year-old, game in defeat from the back mark. Now he was telling his connections he’d done enough and was ready to retire. It became impossible to find superlatives that haven’t been used to describe Lyell Creek.

Today a hale and hearty Lyell Creek continues to enjoy retirement at the Templeton home of his minder Jenny Butt, mother of Tim and Anthony and whose father the late Derek Jones, president of the club 1994-1997, has since 2006 been memorialised in the name of the time-honoured DG Jones Banks Peninsula Cup.