Skip to content
An interview with Lindsay Blackmore, Club Patron

We recently sat down with Lindsay Blackmore, Banks Peninsula Trotting Club patron and member of long-standing. Not one to blow his own trumpet, Lindsay typifies the volunteer ethic that underpins harness racing in New Zealand; a volunteer stalwart who among many others has made a contribution to our sport and industry that cannot be underestimated in this fast-changing society.

So Lindsay, what are your earliest memories of Motukarara?

I grew up on a farm at Ellesmere and going to the races was just expected. It was such a big part of the community then – what my mates and I did as young fellas. Motukarara was our local track, with the Banks Peninsula Trotting Cup the feature. We went to most of the country meetings – Methven, Rangiora, Timaru and Hororata. I fondly recall When and Bill Doyle winning the first Trotting Cup in 1965.

And your involvement with the Club?

It was only natural to make the most of the social side of racing. There wasn’t a lot else to do in our spare time. As soon as I was old enough I joined the trotting club. There was just one meeting a year at the start – in October. When we got our second meeting it was between Christmas and New Year. The place was packed, even the big hill. The car park couldn’t cope and latecomers had to park on the roadside and walk quite a distance.

And your recollections of club membership back then?

In those early days it was a real privilege to become a member, like you’d been accepted by society. When I was approached to be a steward, I had to learn about campaigning. The competition was keen and elections were hotly contested. We’d have well over 100 people at general meetings, which were held in the old Motukarara Hall. It was like everyone in the district wanted to be a part of it.

You were not only involved in administration, you also trained horses.

Yes, for 30-odd years. After Judith and I bought a chicken farm in Brookside Road, I found I had the time for it. I was basically self-taught and never had more than one horse in work at a time. I’d drive them down the grass verge to a farmer’s track to fast work them.

Your HRNZ stats show you had a good strike rate during your time as a trainer. What were some of the highlights?

I had 23 wins, 37 seconds and many more placings from 193 starters. Richina was my first winner – a dead heat at Timaru in 1983. She won seven before we sold her to the States. Ill Informed won six and gave Judith and me a big thrill when she won the Green Mile at Methven in 2003 with Colin DeFilippi driving. Dela Rentae won at Mot ‘s 1991 Christmas meeting – that was special.

We bred all our own horses, the first being Almetos who won 8 here including the Waikouaiti and Cheviot Cups when trained for us by Leo May. Other handy horses we had were Finvarra, Village Rock (from Dela Rentae), Jackaroozy and Hickstead (from Ill Informed), who won 3 in NZ and another 18 in Australia.

Getting back to your club involvement, you have served for over 50 years, and you were saying you only ever missed two AGMS. But you never took on the role of president. Why was that?

I was never one for running meetings, and always preferred to stay in the background helping on the practical side of running the club. Once I got involved in training I actually resigned from the committee but stayed as a steward until being made a life member a few years ago. I’ve been around during the terms of 17 presidents, but never felt I was right for the position myself. 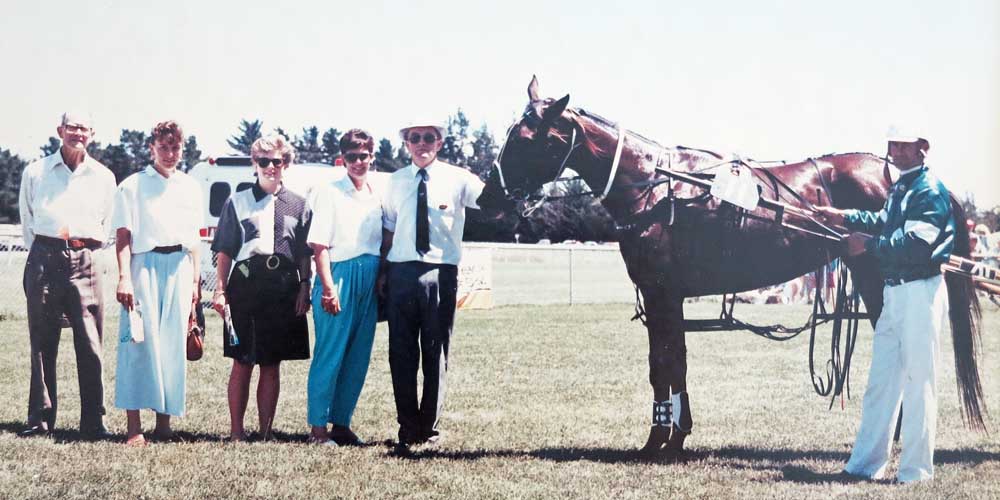 As you reflect on your time with the club, what are some of your strongest memories?

Well it’s been satisfying to see the way the club has grown from one to six meetings in a year, with the crowds still coming along on the big summer race days and the industry support still there. Motukarara has become known as the place for big even fields where every horse gets its chance and that’s attractive to punters. But it’s also the community links that make Banks Peninsula special. There were a lot more working bees in the old days, but there’s still a good turnout when jobs need doing and volunteer input is still at the heart of the club. My job these days is to put out the pylons before each meeting.

Thank you Lindsay. Your contemporaries hold you in high regard and you come across as a great role model for younger members.

I was very surprised to be put forward as Club patron, I never expected my involvement to be acknowledged in that way. So many people at Motukarara know me I guess and I’ve made a lot of friends. It’s not a hard job being there, catching up with acquaintances and offering guidance and helping hand to newer club officials. Flying the flag for the club and harness racing when I can.

Unassuming and humble to the last, Lindsay Blackmore exemplifies the volunteerism that is the glue holding country harness racing together. When we met with Lindsay, he and Judith were in the process of shifting from their property on the outskirts of Rolleston – soon to be a housing subdivision. The place in Brookside Road has long since become part of the urban expansion.