The impressive win of Maren Franco at Motukarara on Easter Monday put Sarah O’Reilly back on top of the national junior driver’s premiership.

O’Reilly scored her first win in her uncle Leo’s colours when the progressive mare powered down the outside of the track to win race 6.

The last time the junior driver drove for her uncle was on her first day of driving back in 2018. 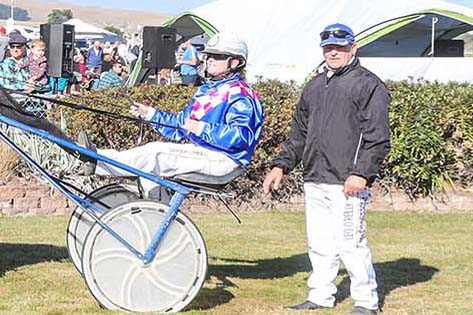 O’Reilly has gone on to produce outstanding results since and her drive behind Maren Franco was further proof.

“She feels really good and she is a really lovely horse to drive,” O’Reilly said.

“The last time I drove for Leo was on my first day of driving way back in the day.”

“So that was only my second drive for him.”

Monday’s win came after O’Reilly produced one of the most exciting drives of the season behind Mabalene at Wyndham on Thursday.

The Brent White trained mare was left around 12 lengths in front of the field after O’Reilly sent her forward to find the lead.

The junior driver didn’t intend on leading by so much, but once she was there she was left with the task of judging what pace to keep up.

And the reinswoman did that perfectly.

“She just feels like she is gliding over the ground, she just does it so easily.”

“We burnt off the gate and we ended up in front by too much, I didn’t realise at the time.”

“But she was never pulling or anything, we just ended up in front by a wee margin I didn’t expect.”

“When I looked behind I was pretty surprised they were that far away.”

“I just had to judge it the best I could in front and try and make her feel comfortable.”

“In the end she just jogged it, I didn’t pull the plugs or anything.”

Mabalene went on to win by 13 and a quarter lengths and set a new national record for a four-year-old and older mare for a 2400m mobile with her 2.53.5 winning time.

O’Reilly’s Easter wins have her two wins clear of Ben Hope at the top of the national driver’s premiership with 22 wins.

Though it is not something the junior driver is focusing on.

“Hopefully it can stay that way.”

“I look at it sometimes but I try not to worry about it too much.”