Following the Banks Peninsula Trotting Club’s Easter Monday meeting, the Motukarara grass track racing season is done for another year and our club competitions have been decided. And the winners are: 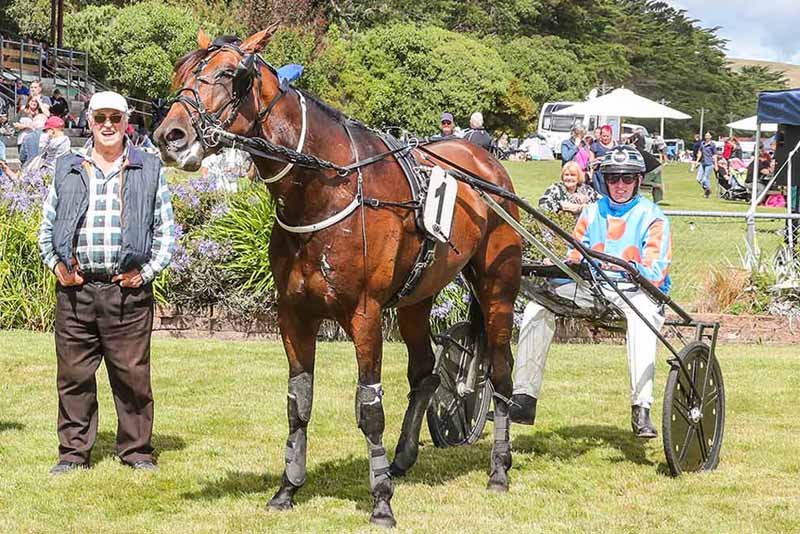 Sam Thorney with Royal Pride after their win. Trainer and competition co-sponsor Fred Fletcher looks on.

Always competitive and this year no exception, the Junior Drivers’ competition was undecided until they crossed the line in the last race of the season. With wins behind Royal Pride, Paris Prince and Shard’s Fury and a number of placings, Sam Thornley accumulated 22 points to beat Sarah O’Reilly (20) and Korbyn Newman (14). All three placegetters receive a cash prize through the generosity of the Blackmore and Fletcher families, regular supports of this event.

The depth of junior driving in Canterbury is indicated by the fierce competition in this division. Sam was the only junior to exceed one win during the season, which as usual included a race restricted to junior drivers at every meeting.

Driver of the Year, sponsored by The Famous Grouse Hotel, Lincoln

In contrast to the event for juniors only, John Dunn took control of the Driver’s competition early on, courtesy of his driving skills and his family’s strong support for racing at Motukarara.  John dominated on the track from day one in September when he took out the feature race the DG Jones Memorial Banks Peninsula Trotting Cup with Mataderos. Clocking up ten wins, John finished the season on 75 points and retained the title he won from Blair Orange last season. Blair came in second on 50, followed by Matty Williamson on 39 and Robbie Close on 34.

John takes away his $250 voucher courtesy of The Famous Group establishment.

Colleen Breen Memorial Best Filly or Mare of the Year

Maren Franco (A Rocknroll Dance – Motu Born To Sparkle) reigned supreme In the Collen Breen Memorial Filly/Mare of the Year competition.  The Leo O’Reilly-trained and Strappers Syndicate-owned four year old was well rewarded for starting at five of our six meetings. Two firsts and a second for 13 points put her just one point ahead of her sometimes rival Sophia Bromac, who also started five times but while very consistent fell short with just one win. Trotting mares Awesome Impee (9 points) and Aldebaran Heather (8 points) came in next.

Truly emphasising her Motukarara supremacy, Maren Franco also won her race at the annual Akaroa meeting on the track.

The Maren Franco team after their Easter Monday win

Farmlands Feedbarn Trainer of the Year

As with John’s driving dominance, Robert Dunn and Jenna Dunn made no race of the training competition – Robert also for the second year running. The partnership in fact coasted in the end, accumulating 33 points by the January meeting while not troubling the scorer over the final two meetings. Nevertheless they were 13 points clear of the field, Fred Fletcher coming in second on 20 points with Mark Jones and Bruce Negus collecting 19 points.

Robert and Jenna receive $500 of stock food from Farmlands and hold the Motukarara Trainers Trophy for one year.

Jim Curtin took out the Trainer’s prize on the UDR system (minimum four starters).  Starting the minimum number of runners to qualify, Jim struck with wins by Chal Be in September, Star Casino in January and Gana in March for an impressive strike rate of 0.75. Leo O’Reilly came in second at 0.5926 from six starters and Gavin Smith third with 0.4444 from seven.

This was the first running of a revived UDR competition that had operated until some years back. With UDR a key measure of training success that recognized different scales of operation, it’s a welcome reintroduction with the winning prize being  a bucket of Maxia Complete valued at $430 courtesy of Seahorse Supplements.

Our thanks go to everyone who participated in club competitions in another action-packed harness racing season. One that by the end we were all finally able to enjoy after a tumultuous two years of covid restrictions.

Note: Banks Peninsula Trotting Club continues to align our competitions with what was the  racing season but remains the grass track season, when our race dates are scheduled between September and April.